Get Free Riddles By Email!

The Shortest Sentence In the World

What is the shortest sentence in the English language? 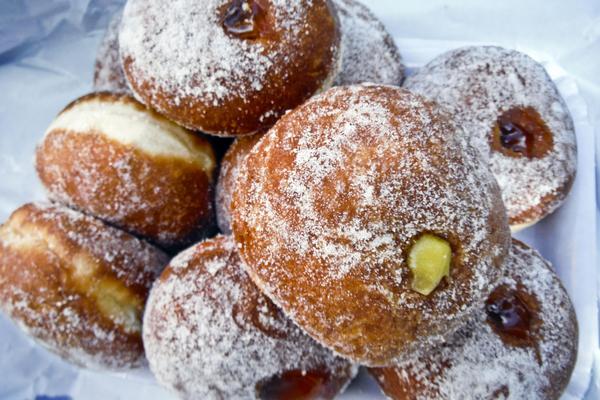 But that’s not the whole answer. There is an even shorter sentence using an imperative with an implied subject (how’s that for an English terminology-filled sentence?) With “Go,” the “you” is implied. For example, if your wife wanted you to go with her to pick up some donuts and you were busy, she might say, “I really want to get some donuts, I’m starving!” and you might reply, “Go!” The implication being you never wanted to get donuts in the first place because you like ice cream more anyway and if you’re busy you’re probably doing something worthwhile and important and can’t be disturbed for such trivial matters as acquiring sweet pastries with holes in them, no matter how much of a waste of time your wife says your pursuits are. In short, “Go” is the shortest sentence in the English language that also has the longest implied meaning. Do you want to get get some ice cream? Go!

Ava pointed out in the comments that No is another viable alternative.

76 Comments on "The Shortest Sentence In the World"

That’s what the answer says :)

The mere reason that it is a reply to a question does not make it a sentence. In fact, a lot of the replies we make on a daily basis are still fragments; they just make sense in context. Also, interjections do not count just because they have punctuation — it is still an interjection and not a sentence. A sentence consists of a subject and a verb. I would say that “Go.” makes the most sense, since you could argue for the “understood you” making it: “[You] go.” which still follows the subject then intransitive verb pattern. But, you know, if that is too crazy for people, “I am.” and “To be.” are both very short sentences that are obviously sentences.

“I exist.” —– is the shortest valid sentence.

“I am” is the shortest sentence!

Alexander Dumas uses it frequently when a character denies an accusation.

Much of the verbiage is implied. It’s basically a short way of saying “Are you suggesting that I did that?”

Stop. Because the “you” is also implied.

I too agree with “I am.” But my teachers scolded me for that and even deducted my marks. I think that they might not be knowing but they should have thought about it.

Go is a sentence or not.

One common understanding of the requirements of an English sentence are: 1) starts with a capital letter and ends with a punctuation mark, 2) has subject and predicate, 3) contains a complete thought.

With that in mind the shortest two English sentences that satisfy the rules are likely “Go.” and “Be.”, with the latter being a bit existential.

Actually, the shortest sentence is “O.” “O” is a word that means about the same thing as “oh”, but when you say it, it is just a quick “o”, not an ohhhhh.

Go! Correct answer. “You”, the noun (subject singular or plural) is understood because of the interjection of the commanding verb “go”, hence, (you) go (get it), whatever…just “go”…School House Rock Rocks! So does an education.

………………….. is the shortest sentence in English language that also has the longest implied meaning.

So is also one

So is also one also hi

World’s smallest sentence is ‘DO’

Since “I am” is a sentence ( I being the subject, am being the predicate), would “I’m” be a sentence?

‘I?’ Is the shortest because u could ask “do u no the letter I?” And they could say “I?” Then the other person replys with “yes, I”

I can’t be a sentence.There is no verb.Go and Do can be the shortest sentences with the subject you is implied.

I would agree that “I AM” is indeed a short sentence…

THEREFORE… Since I AM can be trimmed down to a single contraction, I would suppose the world’s shortest is none other than: “I’m.”

NEED
CORREcT ANSWERPM me aon fb Kate L. Yamson if you know it
PLEASE this is an assignment
1/25/2016 should it be passed

I think the shortest sentence is I am

btw, although I am and I go are both three letters, I am is considered shorter because it is “before” I do alphabetically (I learned this in English class at some point). Then I randomly thought up, what about I’m??? Isn’t that the shortest sentence??

Yes is one of the shortest sentence

It can be argued that “I do” is BOTH the shortest and could be the LONGEST sentence in the English language as well !

“go” is the shortest sentence because go is the verb and it’s talking to us, the subject.

Go is the shortest sentence in the world guarenteed.

If you are standing at the door asking for permission like “May I come in ?”
The answer might be “yes, come in.”
OR simply yes.
OR “NO, You can’t.”
OR simply NO.
Yes and NO in these regard express the full meaning that is necessary to be a sentence.
NO IS the smallest sentence.

(Go!) is the shortest sentence of grammar.

I would argue that since “you” is the implied subject that “I am” is grammatically the shortest complete sentence.

Technically, this is incorrect, as a sentence needs a subject and a doing word. ‘Go’ is ‘the doing word’. There is no subject and therefore cannot be classed as a sentence. ‘I am’ or ‘I do’ would be the shortest sentences possible.

Yes, “Go,” Is the verb, but the subject, “You,” is implied, and therefore, doesn’t need to be present in the sentence.

you is the implied subject of “Go.” there is no subject in the phrase “No.” as “No” is not a verb, it is simply a response that can be used regularly to answer a question, or as an adverb or adjective ( or a subject as i am currently using it in this sentence ).

“I am” because a true sentence requires both a SUBJECT and a VERB, otherwise it is a FRAGMENT. “I” is the world’s shortest fragment sentence.

Well, so what is the conclusion.

I think ‘Go’ is the shortest sentence.

“Yes” is a sentence.

go is the worlds shortest sentence

Scientist believe the smallest sentence in the world is the simple letter I.

The shortest sentence in the world is I am!